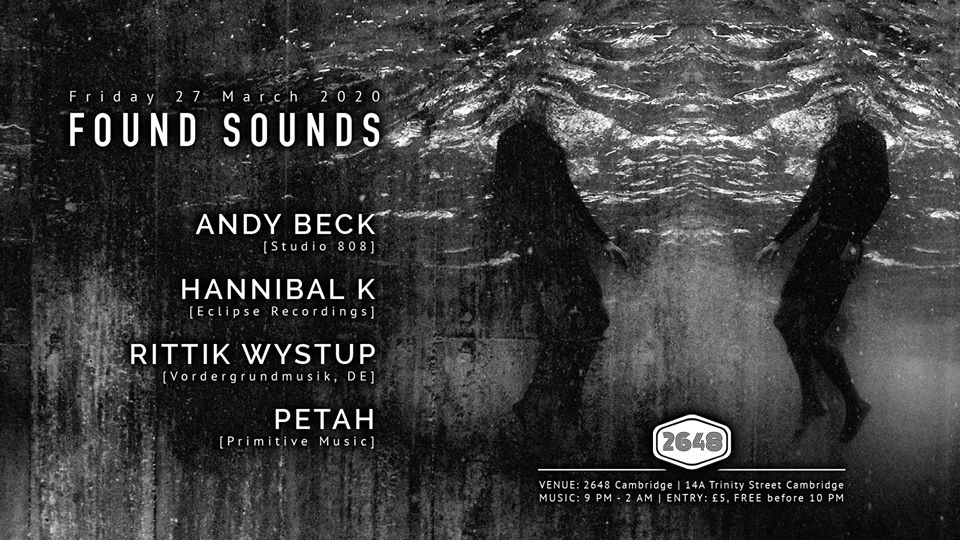 After kicking off 2020 with one of the busiest nights we ever had, Found Sounds is back again in 2648 Cambridge at the end of March with another strong lineup of local and guest DJs.

Inviting back to Cambridge one of our favourite techno DJs, Andy Beck, and also HANNIBAL K, the extremely talented producer, DJ and visual artist, supported by a special b2b set of Rittik Wystup and Petah from the original Primitive Music crew – this night won’t disappoint!

If you have been to Found Sounds before you know what to expect: a deep exploration of quality electronic music in a safe space for self expression.

Rising from the ashes of A:B:S comes Andy Beck. With over 10 years experience of playing and producing breaks & Tech-Funk in his previous guise, the new identity hails in a new more purely techno focused sound and a renewed enthusiasm for the music he plays.

The mysterious London producer HANNIBAL K, is starting to make his presence known in the techno world. Already gaining recognition from some of the biggest names in the industry. He is taking his listeners and fans on a journey to a new dimension of not only sound, but sight. A journey into wondrous land whose boundaries are that of imagination. It is an area which we call…HANNIBAL K!

The French impressionist Maurice Ravel once said, “Music should be emotional first and intellectual second.” This sentiment is at the core of Frankfurt-based Rittik Wystup’s compositions and productions. Dive into a sonic exploration which reaches beyond the standards of the four-to-the-floor (or five-to-the-floor, three-to-the-four, straight-to-the-core) formula, manifesting in cascading streams of playfully but intelligently arranged elements. Don’t quiver, just cavort…

Petah was born and raised in Hungary, and spent his early 20s in the Hungarian capital, Budapest, where at that time the underground techno scene was booming. He was fascinated by the open-mindedness and expanded-mindedness of the scene, and years later when he moved to Cambridge, these memories were his main inspiration to gather talented local DJs and producers around, and to start organising the now infamous Found Sounds nights, bringing quality techno music to the Cambridge nightlife.